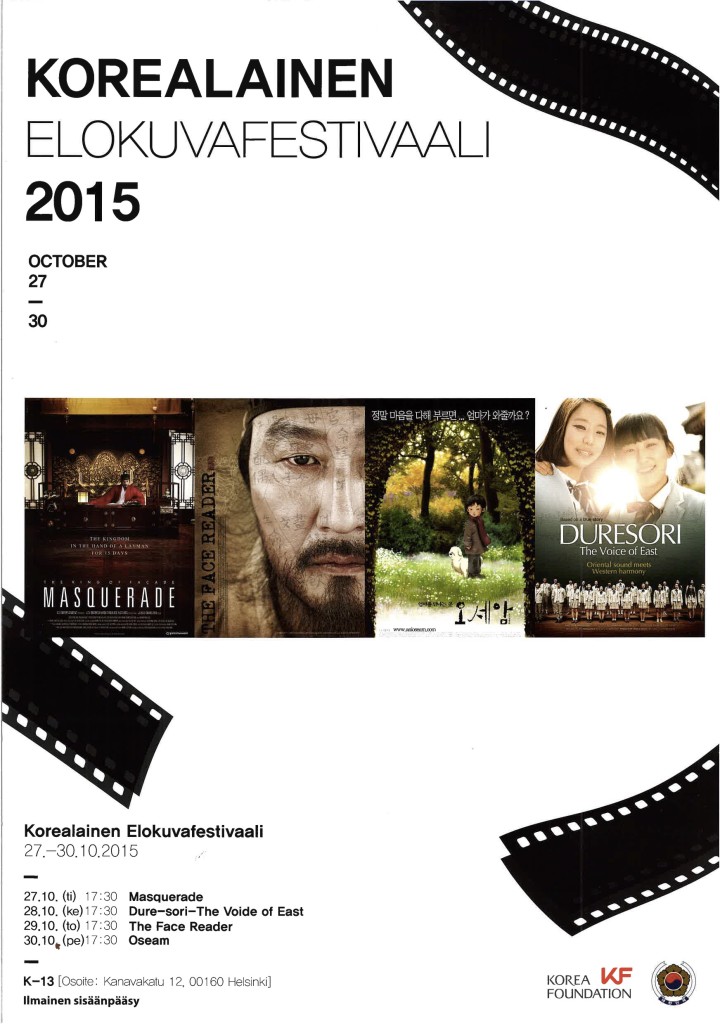 Welcome to the Korean Film Festival 2015!

The festival will be held from October 27th to 30th. Each day a different film will be featured. All films are subtitled in English.

The festival venue is cinema ”K-13” at Kanavakatu 12, Helsinki.

The opening movie Masquerade (2012) tells the story of a 17th century king and a lowly joker who takes his place while the king is recovering from an assassination attempt. Impersonating the king, the joker turns out to be a more humane ruler than the real king ever was. But the king’s entourage begins to get suspicious… The exciting drama and witty humor of Masquerade have made it one of the most popular Korean films ever.

Recommended for audiences over 15 years of age

Duresori – the Voice of East (2012) is a film based on a true story of two student girls. Shot in an almost documentaristic fashion, the movie depicts the meeting of Oriental and Western musical cultures.

Recommended for audiences over 12 years of age

The Face Reader (2013) is another historical drama that has become a super hit in Korea: over nine million people have seen it in Korea only. It is a fascinating story of a man with a special gift for reading people’s personality just by examining their face.

Recommended for audiences over 15 years of age

Oseam (2003) is an animated film that has been described as a “faerytale for adults”, though it is suitable for all ages. The theme of the film revolves around Buddhism: Oseam literally means “Five-Year-Old Temple”. Even though the film has received numerous international awards, it has not been easily available for European audiences until now.

Embassy of the Republic of Korea